~ Where everyone deserves a Happily Ever After! ~

Win a print copy of CHASE ME 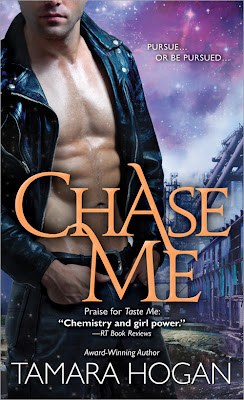 Please welcome Tamara Hogan to Guilty Pleasures.
I don’t know about y’all but the cover of this book caught my attention. I have not read anything by Tamara before so when I found out I could ask Tamara about her books I wanted to know:
(and after reading this post I have added the series to my TBR)

“What makes the Underbelly Chronicles’ world unique?”
There are a couple of things that I think set the Underbelly world apart from other paranormal or urban fantasy romance worlds. The first is the origin story. You see, these creatures… aren’t exactly human. Okay, at all. They’re creatures of extra-planetary origin whose ancestors’ spaceship crashed here several thousand years ago. Hopelessly marooned, they established their own governing council, with a primary goal of living their lives staying under humanity’s radar.
In other words, long-awaited “first contact” has already occurred. The answer to one of our era’s defining existential questions has already been answered—and humanity just doesn’t know it yet.
On the ship that fateful day were a number of species who evolved on adjacent branches of humanity’s family tree, with some strengths and abilities that are not magical by any means, but that provided a distinct survival advantage on their planets of origin.  In the world that I’ve created, incubi and succubi secrete luscious pheromones maximizing their sexual attractiveness, and must absorb emotional energy—particularly sexual energy— for sustenance. Sirens amplify emotional energy with their voices. The Valkyrie have hyperactive adrenal systems which makes them vicious fighters and aggressive lovers. Werewolves, the only shape shifters in my world, typically have amazing scenting abilities and a high level of visual acuity, but are starting to exhibit some genetic frailties as a species due to inbreeding. Faeries have stunning empathic abilities, and my vampires, allergic to Earth’s UV rays, drink blood for its hemoglobin, which has healing properties.
One thing that was important for me was that I provide for all of my species’ skills and abilities not with magic, but with a set of physical characteristics that could theoretically and reasonably be produced through living on planets with different environmental realities and challenges. CHASE ME’s villain, the vampire Beddoe, is horrified to find that the locals use water—precious, rare water—to wash their bodies. Such flagrantly wasteful use is a crime punishable by death on his homeworld.
Another way that I think my world is unique is that these alien creatures are not smarter than, or superior to, humans. Sure, they have a different set of abilities—some which are beneficial, and some that are detrimental. Certain members of the Underworld Council have come to suspect that their private data archives may be incomplete and possibly inaccurate; their kind has been on the planet for closer to three thousand years rather than the one thousand they’d previously thought. The degree to which we should trust or rely upon our data and information sources is one of the series’ ongoing themes.
Do you think humanity is the sole intelligent life in the universe? Why or why not?
One lucky commenter will win a print copy of CHASE ME. Winner will be selected using random.org 6/16/12. Contest open to US and Canada residents only.
Follow Tamara!
Website:              www.tamarahogan.com
Facebook:           https://www.facebook.com/pages/Tamara-Hogan/232541540189788
Twitter:                https://twitter.com/#!/TamaraHogan1
Goodreads:        http://www.goodreads.com/user/show/4866483-tamara-hogan
CHASE ME BY TAMARA HOGAN – IN STORES JUNE 2012