Game Misconduct is an exciting, HOT new release coming out February, 9th, 2012.
Bianca will be stopping by Guilty Pleasures on February 15th. 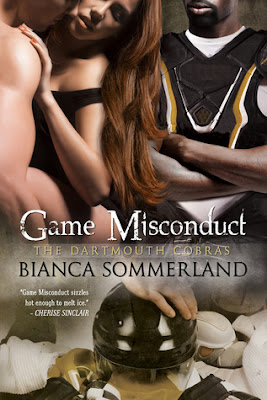 Summary:
The game has always cast a shadow over Oriana Delgado’s life. She should hate the game. But she doesn’t. The passion and the energy of the sport is part of her. But so is the urge to drop the role of the Dartmouth Cobra owner’s ‘good daughter’ and find a less…conventional one. Playmaker, Max Perron, never expected a woman to accept him and his twisted desires. Oriana came close, but he wasn’t surprised when she walked away. A girl like her needs normal. Which he can’t give her. He’s too much of a team player, and not just on the ice. But then Oriana’s father goes too far in trying to control her and she decides to use exposure as blackmail. Just the implication of her spending the night with the Cobra’s finest should get her father to back off. Turns out a team player is exactly what she needs.

I have read several books by Bianca Sommerland and I am a big fan of her writing style. She knows how to push the envelope but in a way that is really believable.

Oriana has not had an easy road in life so far. All she has really ever wanted was to be loves and acknowledged by her father who happens to be the owner of the Dartmouth Cobra’s hockey team. He has no time or desire for her. She lands in a lousy relationship with the head coach and is forced to remain in this unhappy situation by her father threatening her to cut her off from everything if she does not.

She decides to call her father’s bluff and seeks after the man who has always secretly held her heart, Max. He also just happens to be a player on the team. She not only gets to be taken care of by him, but several other team players go along with this plan. The one thing they didn’t expect to happen was for this to last longer than one night.

Ms Sommerland takes us on an extremely incredible journey as we watch Oriana’s master her own sexuality. She comes to realize that there is more out there that she craves and desires, than she has ever realized.

The scenes in the book were very believable. I never thought I would ever be able to read a scene with 5 guys and 1 girl and not get confused as to where all the body parts were, but I did, and I loved it. The detail and flow of the story was spot on.

I also loved the hockey scenes. She described the games as though you were right there watching it happen. The language of the players and the way she described the action on the ice was very thorough.

This book is not a sweet loveable romance book. It is a book about Oriana learning that there is more available in life than just 1 guy and vanilla sex. The men teach her what they have to offer and you get to experience the learning stages right along with her.

I really enjoyed this book. There were several times that I worried how everything would tie up in the end. There was no need to worry; she did a beautiful job making sure there was a HEA. I am anxiously awaiting book two in this series, Defensive Zone.

The characters, were sexy and strong, just like I them. I could envision each of these hockey players on the ice and in the bedroom. It’s quite a fantasy to take half a hockey team. And Daddy’s hockey team? Even better. My one complaint, was I had a hard time with so many men, and keeping their names straight while reading. They tend to talk to each other using first names, last names and a few nicknames interchangeably. Eventually I did get them all organized in my mind. I wonder if hockey trading cards within the book would have helped the reader visualize each of them independently?

Game Misconduct does not evolve like the typical menage where a group of men are trying to find the one girl to make them complete. This is a group of strong dominant guys each looking for their OWN girl. While Oriana ‘belongs’ to Max, they each would like to have her all for themselves. The emotions are deeper, and the bonds established with each are somewhat independent of each other. Because of this, it seemed more ‘real’ to me compared to other menage stories I’ve read.