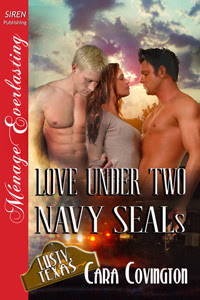 Publisher’s Blurb:
Julia Benedict fled New York City for her home of Lusty, Texas, after one unforgettable night making love under two navy SEALs. She’s fallen for them, hard. But Dev and Drew are the wrong type of men! They’re more Alpha than all the men of her family combined, and if there’s one thing Julia doesn’t want, it’s a pair of husbands who will boss her around just as her brothers have always done.

As Dev and Drew set out to court her, Julia begins to understand there’s a world of difference between bossy brothers and strong, caring lovers. But a case of mistaken identity finds Julia kidnapped. Her lovers must find her before she’s turned over to Miguel Ramos.

With Julia back home safely, the SEALs know their enemy will strike again. But as the men of Lusty gather to entrap the villain, it is the women who take the biggest stand—and the biggest risk.

Slick’s Thoughts:
I’ve read this entire series including the Founding Father’s books and they always contain hunky, strong, alpha men and the women (and men) they love. The last three books have had an ongoing “bad guy” character which is kind of unusual and thus I highly recommend that you read the books in order otherwise you might be a little lost. Because most of the people in Lusty are related to each other they weave in and out of these books and it can sometimes be hard to keep names and families straight. The heroes in this book actually set up a white board in their house trying to learn who belongs with whom.

I have a confession, I like Lusty, Texas…there I’ve admitted it and from what I understand that’s the first step. One thing about this book and the entire series, there isn’t much “chase” to the story. Dev and Drew have been members of the same SEAL team since training. During a mission gone wrong, they decide that Julia is their future and set out to pursue her. The sex at the beginning seemed a bit awkward. I got the impression that Dev and Drew weren’t quite comfortable with the situation even though the joint relationship was their idea. Julia was bit too much like an emotional yo-yo for me. She had issues wanting them because she was worried about them controlling her like her overbearing brothers, yet she feels safe in their arms. She wants them, she doesn’t. All that back and forth, no wonder men are confused by women! But in true Lusty, Texas fashion the men are completely devoted and overlook all of her prickliness because she is the one for them.

This was an enjoyable read even though it’s not my favorite in the series. I know I keep referring to the series because honestly, I feel like each of these books is chapter in a much larger book. There are so many characters and they are always way involved in each new story and in this book we are introduced to even more new characters. But that’s the thing, the people of Lusty, Texas are crucial to each other and each story. Plus, you just can’t help liking the ever growing cast of characters.

I can’t wait for the next installment of this series. It is the story of Ginny Rose whom the town “adopted” after she was rescued from an abusive relationship.