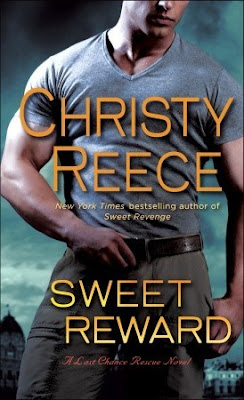 Summary:
Adrenaline junkie Jared Livingston has found the perfect blend of exhilaration and danger in his new job at Last Chance Rescue. Raised to depend only on himself, Jared tried marriage, but the end of the relationship renewed his belief that he was meant to be a loner. Now a desperate plea from his ex-wife puts Jared in the unique position of using the skills she despised to rescue her missing daughter. The case brings Jared face-to-face with Mia Ryker, the only agent ever fired from LCR—for playing too far outside the box. Now Mia’s back, and as a team, they’re as compatible as fuel and fire—blowing off tension in each other’s arms, blowing open the secret life of a wealthy philanthropist and his shameful dealings. Their search for the innocent child takes them to places neither have been before—to the edge of danger and to the edge of their hearts.

DiDi’s Review:
This was such a bitterSWEET read for me. I couldn’t wait to start it, yet I wanted to drag it out because it is the last of the series.   Even wanting to drag it out and savor it, I could not put it down and read it in one sitting.  All I have to say is what a great way to end one of my all time favorite series!!!

I was captivated from the get-go with the heart-wrenching opening scene.  Sweet Reward is IMO one of the most emotional in the entire series and has the sweetest journey to healing for both Mia and Jared.

Jared is the sexy, adrenaline junkie who never smiles. Mia is a tough, yet girly, ex-LCR agent, the antithesis to what Jared thinks a female LCR agent should be.  After his failed marriage Jared has sworn off marriage but he can’t resist Mia.  Jared is the kind of hero I love stern, dominant, tortured, yet under that shell lays a softy for those he cares about.

Sweet Reward is action packed, emotional, sexy and has many LOL moments.  I LOVE the back and forth between Jared and Mia. She is sassy, feisty and tough, he literally had a hard time figuring out how to deal with her.  When he finally gave in to his desire it was smokin’ hot!!!  The tender moments when he finally opened up and told her about the ghosts that haunt him and her reactions to his confessions are some of the sweetest I’ve read.  (I want to put a few of my favorite quotes, but I won’t, I don’t want to spoil them for anyone)

We get to see/hear about the other LCR members and OMG there is a scene between Noah and Samara that melted me.

Twenty-four hours after finishing Sweet Reward and I’m still sighing about how happy Jared and Mia’s story made me.

I am really going to miss Last Chance Rescue, thank GOD I can always re-read them any time I want.  I’m such a baby, I’m tearing up as I type this, funny how you can feel so strongly about characters from a book.  In my mind Noah and crew will continue to be out there making those Last Chance Rescues and LOVING their significant others.

As sad as I am to see LCR come to an end, I cannot wait to see what Christy has in store for us next!!

Follow Guilty Pleasures on facebook and here on the site to be a part of our Happy Holidays Celebration. Various authors share favorite holiday recipes, traditions and memories. PLUS lots of give aways! WE LOVE WHEN YOU LEAVE COMMENTS…To leave a comment click on comments a page will pop up for you to leave your comment. Thank you!!