By time I finished the first chapter of Good Girls Don’t, two thoughts ran through my mind, one – WHY THE HECK HAVEN’T I read anything by Victoria Dahl, two put her on auto buy NOW. 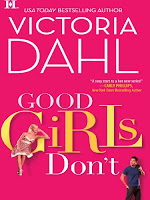 With her long ponytail and sparkling green eyes, Tessa Donovan looks more like the girl next door than a businesswoman – or a heartbreaker. Which may explain why Detective Luke Asher barely notices her when he arrives to investigate a break-in at her family’s brewery. He’s got his own problems – starting with the fact that his partner Simone is pregnant and everyone thinks he’s the father. The last thing he needs is a nice girl like Tessa getting under his skin.

Tessa has her hands full, too. Her brother’s playboy ways may be threatening the business, and the tensions could tear her tight-knit family apart. In fact, the only thing that could unite the Donovan boys is seeing a man come after their “baby” sister. Especially a man like Luke Asher. But Tessa sees past the rumors to the man beneath.


Naughty D’s Review:
Good Girls Don’t is book one in the Donovan Brewery series by Victoria Dahl.  I was extremely pleased by this contemporary romance, besides being a great love story with steamy sex, humor and strong emotional battles, there is a mystery in GGD that honestly kept me guessing for most of the book, every time I thought I figured it out, I was wrong.

Tessa is the youngest of the Donovan siblings, Eric and Jamie are her very protective older brothers. Since the death of their parents, Eric has been like Tessa and Jamie’s father.  Jamie is a playboy and somewhat irresponsible.  Because of their roles Eric and Jamie constantly butt heads and Tessa tries to hold them together.  Luke…I can’t say much about him without spoiling the story, but what I can say is he is a total package, caring, sexy and alpha.  I would say too sweet for his own good in some cases, to the point that he has a reputation that isn’t 100% accurate.

Luke and Tessa have an instant attraction and a HOT chemistry.  Eric and Jamie are determined to keep sweet, innocent Tessa away from “bad boy” Luck.  Luke tries to fight the attraction because of his long time friendship with Jamie, but Tessa isn’t having it.  Luke and Tessa both go into this “relationship” as just for sex, nothing long term because they both have major issues from their pasts, that they just can’t be honest about.